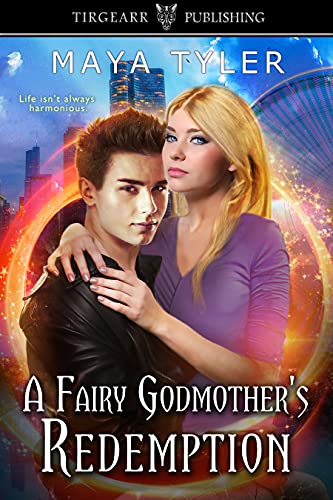 If only your dreams could come true with a Bibbidi-Bobbidi-Boo…Drew Parker’s father abandoned him on his eighth birthday, and he hasn’t thought about him in years. When Drew discovers his father and stepmother have died in a tragic accident, he finds he’s now the legal guardian of his two young half-sisters, Madison and Mackenzie. He’s on his way to college and not prepared for such a responsibility. His mother refuses to help him, but thankfully he has a Fairy Godmother, a magical, who has spent years helping others to make up for the one she failed.Singer Seraphina Jacobs thinks she’s finally made it when her second album goes platinum. Then, just before her tour is set to start, photo-shopped nudes of her appear in the tabloids and threaten to destroy her career. With her reputation at stake, her PR team rushes into action.In a chance meeting, Seraphina makes a poor first impression on Drew. He doesn’t recognize her until he wins concert tickets that include meeting her backstage. When Seraphina’s manager notices their instant attraction, she capitalizes on it for some PR events. What happens when a staged romance turns into something more?No matter what Drew and Seraphina feel for each other, their lives are being pulled in opposite directions. Will a little nudge from a Fairy Godmother help them realize what’s really important?