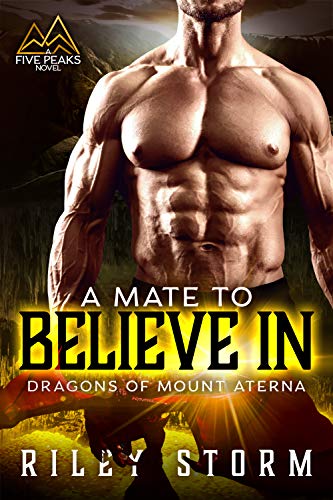 When nobody else had faith in her, he did.

Deputy Carla Frazer has been looking for a bust that will get her promoted for years. Now she has it. Catching a member of The Five red-handed should be more than enough, despite the hatred the fop of a Sheriff holds for her. Now, all she has to do is prove his guilt. His good looks, endless money and disarming charm won’t be enough to save him from jail time. Not on her watch.

Pace Aterna is more of a numbers sort of guy—well, dragon. That’s why he was put in charge of Clan Aterna’s bank accounts. All of them. So when someone tries to steal them from right under his nose, he’s the logical choice to hunt them down and bring them to justice. Dragon-style justice, not human. Now, all he has to do is find the culprit. For that though, he’s going to need help. Her help. Human help.

Carla is ready to take him in, but her boss has ordered her to drop the case. Something smells fishy, and the only place she’s going to get answers…is from her prime suspect. What Carla expected to find was a seedy criminal underworld that she could take down. Instead, she’s got a hunky dragon shifter trying to claim her, a dead body, and a whole world of paranormal trouble doing its very best to kill her.

But to get to Carla, they’re going to have to go through Pace first. It’s time this number-cruncher shows his enemies that his fire burns just as hot as that of his brothers. Because nothing will stop him from being there when his mate needs him most.