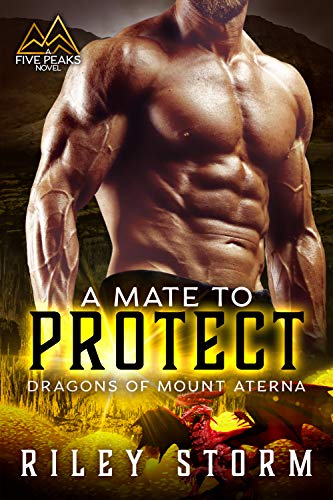 She has nowhere. He has no one. Together, they might just be enough.

Two years of constantly moving to avoid her ex-husband’s stalking has taken its toll on Anne and ten-year-old Liam. She has high hopes that Five Peaks will be different, that perhaps they will be able to find some semblance of peace here, but her hopes are dashed when a fight breaks out in her bar. Now she has to make sure the handsome hunk who started it all by defending her honor is okay. The last thing she needs is a dead body on her dance floor.

Dragon shifter Kal Aterna doesn’t have much anymore. He was in charge the day the Gate to the Otherworld was breached, and someone had to take the blame. Thrown out in disgrace from the only life he’s known, he’s taken to spending his evenings drinking down in Five Peaks. Still, even in his alcohol-fueled state, there’s one thing he won’t stand for. Seeing Anne taken advantage of by a slimeball, he rouses himself just long enough to get knocked out.

Yet when he comes too, the first face he sees is hers. Something changes in Kal in that instant. A new purpose is born, and he won’t rest until he’s proven to her that she’s found more than just a place to stay in Five Peaks. But the past is a tricky thing, and neither Kal nor Anne can get theirs to stay where it belongs. A possessive ex, mysterious disappearances, and a truth that will rock the shifter world. Will their love be strong enough to weather what’s coming?