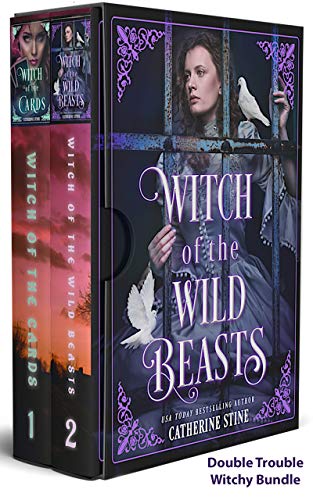 Get into delicious double trouble with USA Today bestselling author, Catherine Stine’s new witchy bundle of her two paranormal novels, Witch of the Cards and Witch of the Wild Beasts.

Witch of the Cards:

Fiera finds out she’s a witch from a powerful sea clan, but someone is out to stop her blossoming power forever. And though she’s falling in love with Peter, a fellow medium, he also has a covert past. Secrets, lies, even murder, lace this sexy, suspense-filled fantasy set in 1932.

Witch of the Wild Beasts:

Is Evalina’s supernatural bond with animals her curse or salvation? In 1854, when a cruel doctor kills her brother, Evalina’s “wild beasts” come to her aid. She’s imprisoned for witchcraft in Philadelphia’s Penitentiary amidst extreme medical mischief. Evalina and fellow inmate, Birdy devise a risky scheme to get justice. If they fail, not only will the doctor’s evil deeds continue unchecked, but Evalina and her crew will surely be hung.