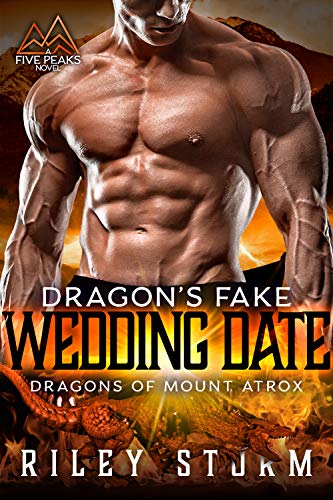 She’s a disaster. He’s determined to claim her anyway.

Gayle Weber’s life is a mess. She’s turning thirty in two days. Her long-term boyfriend just left her for her best friend. And, as if that wasn’t enough, she absolutely hates her job. She has zero interest in flirting with the stranger sitting next to her at the bar, but she can’t ignore the fact that he’s scorching hot. She’s not interested in a relationship right now. So why is her stomach tying itself in knots whenever she catches him looking at her?

Shameless playboy and fire dragon Rann Atrox hasn’t been able to stop staring at the human woman since she entered the bar. He should be using his devilish tongue to seduce her, but it just feels wrong. She’s hurting, and his dragon is telling him help her, whatever it takes. If that means holding back his true feelings and being her pretend date to a wedding, then so be it. Anything for his mate.

Gayle still can’t believe her ex-boyfriend invited her to the ceremony. She’s going to be there though, with Rann sitting next to her. Everyone is going to see her upgrade and she knows the bride will be jealous. Gayle has to keep reminding herself that it’s all fake though. Rann doesn’t actually want to date her. Does he? She’s confused by her own life, terrified of the dangers in his, and feeling utterly lost. By the time Gayle realizes she’s been lying to herself about her feelings, it may be too late…for both of them.