A romantic suspense books series about a woman and a dragon shifter who bowed to protect her. Will he be able to save and set her free?

FIVE snarly, tattooed, alpha males who stop at nothing to claim their soul mates in this fast-paced adventure: Dragons of Las Vegas.

As a dragon shifter, Cade is not used to taking no for an answer. He knows what he wants, and his eyes are set on Nicolette… a beautiful girl whose life is in danger.
Nicolette might just lose everything.
Will fleeing from her destiny get her killed, or will running into the handsome dragon shifter’s arms burn her alive?

A single-minded dragon shifter. A woman in peril. A conflict between passion and responsibility that could destroy them both.
Landon is tasked with protecting Alexa.
And the moment she sees him, she knows he’s the one.
Her attraction towards him expands tenfold when she sees him in his dragon form.
But for Landon, protecting Alexa was his only job.
Falling in love with her isn’t on the table and never can be.
But when Alexa’s life hangs in the balance and his strength and resolve are tested, will forcing what she really means to him mean the end to the life he knows?

Book 3: A Spark in the Dark

A dragon shifter with a mission. A single mom determined to protect her son. When their paths cross, the flames of desire ignite, and danger descends.

Adrienne wants nothing more than to protect her son.
Their life is in danger from her ex.
Brantley believes the dragon he seeks is not only after the ancient key but also Adrienne and their son—the woman who now owns his heart and the boy who holds a secret of his own.
He has no intention of letting his enemy get his hands on either of his intended goals and will do anything to protect them…at any cost.
When dragons clash and blood is spilled, will the truth of the past destroy any chance of a future?

A dragon shifter is set out to save a city. One woman is the key to the mission. The same woman who is the enemy and his mate.

Blaze can’t help but be attracted to Gia.
He needs her to retrieve the artefact for him, a way for him to take control of the city.
But it’s not that simple when she’s Cade’s sister, member of the rivals.
It’s not that simple when she’d be labelled a traitor for being on his side.
Danger surrounds Blaze at all times.
It looms over Gia like a dark cloud.
Blaze wants her to see that she’s making the right choice, but that’s tough when she’s torn between love, duty, and family.

Will the two of them defeat the enemies and find love together? Even if their victory breaks Gia’s heart?

A woman in distress. A dragon shifter who instantly falls for her and vows to protect her.
Scarlett works at a casino under an abusive boss who has feelings for her which are unrequited.
He is constantly roping her into his shady business to the point of risking her life.
During one of these dangerous jobs, she is nearly killed by Drake.
But soon he understands the position she is in.
Will the handsome dragon shifter be able to set her free?

Check for more romantic suspense books at My Romance Reads! 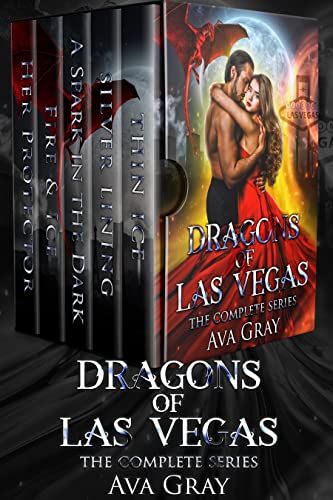