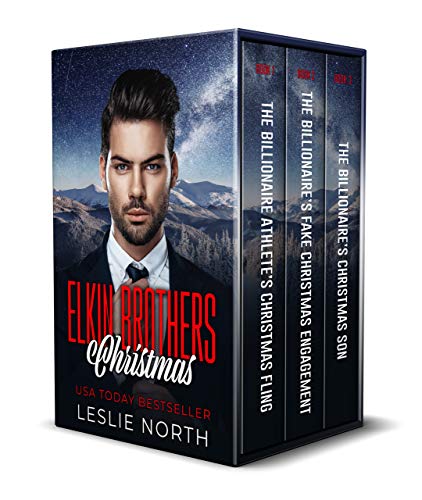 Warm up with three sexy billionaire brothers in Leslie North’s new series about gorgeous alpha males who are each challenged by women they can’t stop falling for.The Elkin brothers are all ridiculously attractive, charismatic, and almost impossible to refuse. In The Billionaire Athlete’s Christmas Fling, Chase is the celebrity of the family. Once a promising athlete, he now works at the family ski resort while desperately trying not to fall for the new ski instructor. Gabe is the tech genius. With his successful digital security firm, he’s married to his career… until he proposes a fake engagement to appease his family in The Billionaire’s Fake Christmas Engagement. Then there’s Jonas, heir to the Elkin empire and CEO of Elk Lodge—and father to a two-year-old he didn’t know existed until his steamy one-night stand shows up with their son in The Billionaire’s Christmas Son.Celebrity headlines, fake fiancés, surprise babies, and enough secrets to fill their luxury closets put the Elkin brothers to the test when these fiery, headstrong women waltz into their lives and their hearts just in time for the holidays. Can these women find a way to overcome the challenges they face on their way to a happy ending? Only if these sexy billionaires step up and fight for the ones they love.