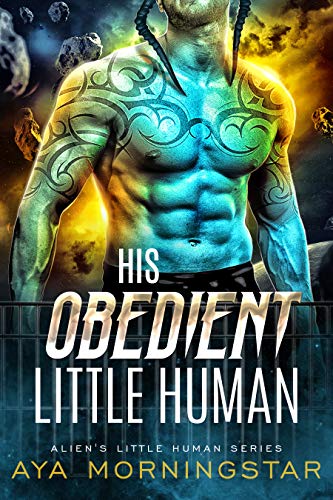 They say you need a belt to break a human, but all he needs is his tongue.

Edith is abducted from Earth by a massive, horned alien with teal and shimmering skin. Just before he beams her up to his ship, Tukahl promises he’ll protect her at all costs.

She’s locked up inside a dark cell on an alien ship. When the door finally opens, Tukahl calls her his obedient little human and tells her that she needs to do exactly what he tells her.

There’s no trace left of Tukahl’s caring eyes or soft touch that she felt on Earth. All that remains is hard muscle and sinew, and his rough calloused hands on her body.

He says he’s going to break her, and that he’ll take what he wants from her. She should be terrified. She should be trembling and crying for mercy on the cold, hard floor of her cell.

Instead, her skin is on fire. Her heart is racing. She wants his touch. She craves it.

His obedient little human is ready to serve.