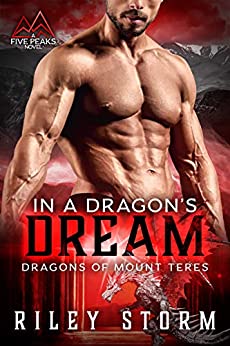 A dragon for a bodyguard?

Rakell Teres is supposed to go and make things right. The woman doesn’t know a thing, she’s just a clueless human caught up in the fight between his clan and the evil dragon underworld. When he shows up at her hospital bed however, Rakell can’t decide if he’s more shocked by her beauty, or by her demand to see his dragon.

Laura Fitzgerald is a successful real-estate agent in Five Peaks. She doesn’t need the money the handsome stranger is offering. What she wants, besides a sudden urge to feel his hands on her body, is the resolution to a burning curiosity. She wants to see a dragon. Ever since she learned the truth, it’s been all she can think about. Except now he’s denying that they even exist!

Laura is good at what she does. She doesn’t need his money. Maybe a protector, she says jokingly, only to have Rakell insist on taking the job. Things get serious quickly when the evil dragons do try to steal Laura. To protect her, Rakell will do whatever it takes. Even if it means marching straight into the evil Cado stronghold to prove that nobody touches his mate and lives. After all, she is his.