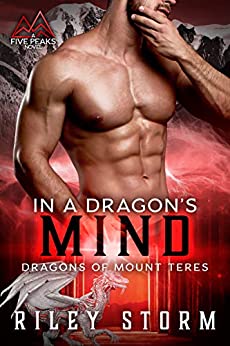 She tried to steal his gold. He stole her heart.

Ellyn Pearson never expected to fall for her captor. After a botched theft leaves her in debt to a mob boss, she takes on a new assignment, only for the gargantuan hunk of a guard to grab her before she’s even picked the lock. Now he’s bringing her food and saying he’s going to bust her out. A lifetime of living among habitual backstabbers tells Ellyn to expect more of the same, but her heart has other ideas.

For Vlad Teres, the human woman might just be the salvation this dragon shifter is looking for. A black mark on his past has driven him from his hometown, but he never intended to fall in with a bunch of evil shifters. Once he hears what they intend to do to Ellyn, Vlad knows he must act, and act soon. Something deep within him feels compelled to protect this beautiful human. There’s only one hitch in his plan: his best friend, another shifter who isn’t so eager to leave this new life behind.

Vlad takes Ellyn to the one place he knows they’ll be safe, and the last place he wants to go back to: Five Peaks. There he figures they’ll be safe from his enemies. Spending so much time with the thief has unintended consequences though, and before either of them realize it, they’ve become more than just captor and prisoner. But if their fated bond is to last forever, they will have to put aside their fears and work together to stop his past from destroying everything.