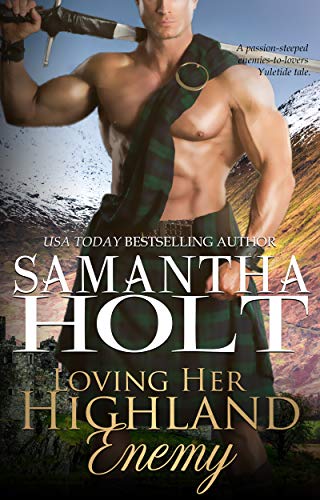 Bold, courageous, and determined, Leana Sinclair is the lone survivor of a horrific fire that stole everything from her.

Even her true identity.

She’s waited for years to get revenge on her clan’s enemies and the time has come. It might be Yuletide, but she’ll not be celebrating.

Nor will she be distracted by Tavish Maclean, the soon-to-be-laird of the very clan she loathes. The tall, intimidating and quick-to-smile Tavish might be the most braw man she has ever met but that won’t change anything.

He’s also the most dangerous—because he knows her secret.

Tavish hasn’t seen Leana since childhood but he knows the lass isn’t telling the truth. He’s no fool. He’d recognize those green eyes anywhere. And while he might not have been interested in curious green eyes when he was a bairn, he’s interested now.

In truth, he’s interested in all of her and that’s no bad thing. His clan is pressuring him to marry her and put an end to the rumors that his family was behind the devastating fire that killed off many of the head members of Leana’s clan. He knows they were innocent of any wrongdoing but what better way to show that than to create a lifetime connection with the Sinclairs?

However, it seems someone else knows her secret too, and might well be willing to hurt her to make it remain so. Somehow, Tavish must protect the foolhardy woman from herself and her unknown enemy, all the while fighting a desire strong enough to bring any Highlander to his knees.