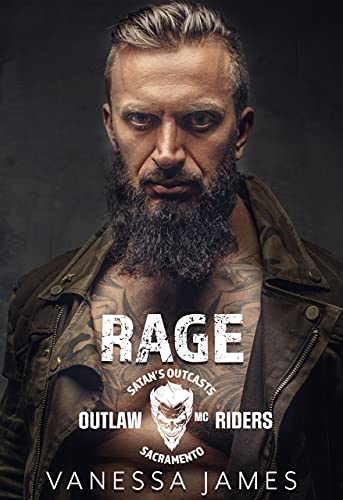 She swore she’d never fall in love – until she met Rage.

As the most feared enforcer of the infamous Satan’s Outcasts biker club, Rage knows how to get what he wants. To him, relationships are a joke, and the only thing he’s interested in is a quick fling to take his mind off the club.

Sick of being hurt by the men she loves, Layla thinks she’s sworn off relationships forever. But when this feisty newcomer crosses paths with a mysterious tough-as-nails biker, she struggles to stick to her rule of not falling in love.

Rage has no time for romance – but try as he might, he begins to feel a budding attraction to Layla that threatens to challenge everything he thinks about love. But when the Satan’s Outcasts start receiving suspicious anonymous messages, he’s forced to make a tough choice – to put his loyalty to the Outcasts first, or the woman he’s growing increasingly drawn to…

Can Rage convince Layla to risk her heart again? Or is their unlikely love affair doomed to end in disaster?