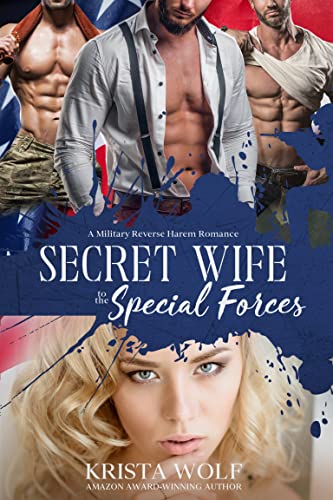 Jace is everything every girl dreams about: six and a quarter feet of pure muscle wrapped in Green Beret camo and Army tactical gear. It doesn’t hurt that his broad chest is decorated with a whole rainbow of ribbons and medals. Or that his two closest friends – Merrick and Aurelius – are also his brothers-in-arms, their inseparable bonds forged in the white-hot fires of combat.But Jace needs a favor… and that favor requires me. His very freedom relies on a little white lie, and with the help of his roommates, we need to pull off the illusion of being a happily married couple. It turns out these boys need favors of their own, and I’m only happy to oblige. But they also harbor a butterfly-inducing secret: as with everything else in their closed little universe, this trio of soldiers likes to share. Can a lonely Minnesota girl actually fall for her brother’s best friend and his two incredible house-mates? Or is my secret “marriage” doomed to failure before the honeymoon even starts?