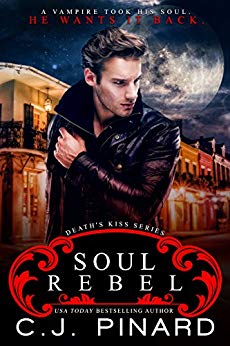 A vampire took his soul. He wants it back.

When 21-year-old Nolan Bishop meets a seductive redhead at a dark club in downtown Shreveport, little does he know that his soul will be gone as soon as she leaves the club. It doesn’t take Nolan long to realize that Eva Sheridan, the succubus who now invades his dreams, has taken something from him. Through the underground network of the supernatural in New Orleans, he discovers he has seven days to destroy Eva before he turns into a sinister and feral vampire himself.

In a race against all that is holy, Nolan encounters Eva’s identical twin, Charity, who is still very much a human. As he begs for Charity’s help in locating Eva, she realizes that his utmost desire is to kill her sister. Although Eva is a relentless succubus, Charity doesn’t want her sister to die. Now, it’s up to Nolan to determine his own future. While Charity and Nolan grow closer, he struggles with destroying her sister. Can he choose between his humanity and his heart in a mere seven days?