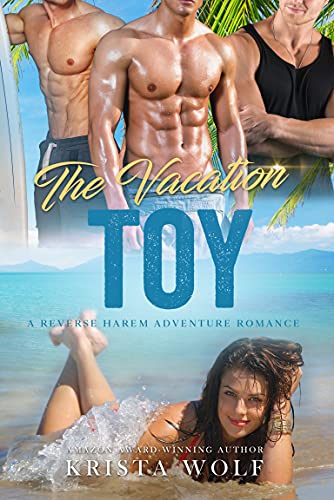 When a booking mistake traps Brooke in paradise alongside three sizzling ex-competitors from the Insane World Race?  The only thing left to do is enjoy the ride.

We were supposed to be reaping the fruits of our labor; an all-girls trip to a breathtaking beach-side villa in Tahiti.  But when my ex-teammates bail at the last minute, I’m stuck in a double-booked villa with our fiercest – and most gorgeous – of competitors.

Differences are eventually set aside, rivalries forgotten as the four of us settle in for sun-soaked week of overwhelming temptation.  But when a molten hot game of Truth or Dare allows me to unravel the guys’ darkest, most butterfly-inducing of secrets?  I’m ready to let them take me places I’ve only dreamed of going before.

Devin and Reese are ex-college athletes, hard-bodied football players with soft hearts and goosebump-inciting smiles.  Hayden’s the quintessential California surf god; blond-haired and blue-eyed, with a whole delicious ocean of ripped abdominals I could drown myself in, forever.

But our vacation in paradise takes a chance turn when we’re thrown into the heart of the Insane World Race’s next – and most infamous – season.  And with an incredible four-million dollar prize on the line?  Our impromptu arrangement in paradise might have to be put on hold, at least while the cameras are running and we’re racing around the world together as the ‘Dream Team’.

Can I spend an entire month racing alongside three lifelong friends and business partners, without any of us falling in love? Or will my overwhelming attraction to all three of them create a rift that can never be repaired?