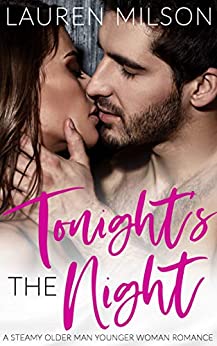 I know it’s wrong. He’s my best friend’s dad. But I can’t help it. Tonight’s the night.

A year ago, I left home to go to college on the other side of the country. I thought the time away would dampen my innocent crush. But the fire inside me hasn’t dissipated. No way. The time apart has only added fuel to the flames.

My crush isn’t so innocent anymore. And now that I’m home for the summer, it looks like the feelings are mutual.

A year ago he was a shoulder to cry on. A rock to steady me when I needed it the most. He was sweet and kind and a wonderful man. But now, everything is different. He doesn’t look at me so sweetly anymore. His eyes caress me like a flame. He’s sneaking glances at me that are anything but innocent.

The way he looks at me in my little white bikini tells me everything I need to know.

Okay, maybe I put on the bikini to push him. I didn’t think he would actually take the bait. Turns out I thought wrong. Very wrong.

It looks like tonight is going to be the night. The night I’ve saved just for him.

But once this protective, possessive older man gets me in his arms…something tells me I’m never going to want the night to end…