Paranormal romance novels took the world by storm with the release of the “Twilight” series, which saw the unusual and often dangerous romance between a vampire and a human. While this was not the first paranormal romance novel to be written, it certainly catapulted the genre into the spotlight.

If you want to dive into the world of paranormal romance or simply look for a great book to read, look no further. From fairies and shapeshifters to wolves and vampires, forbidden love is a hot topic that gets almost every woman hot and wanting that love that they read about in paranormal romance books.

Add in a human woman or man, and that love becomes even more exciting as it crosses the socially acceptable norms of a “normal” relationship. Unfortunately, while some wish it could be true, these fantasies exist only in the books we read and the movies we watch.

We have reviewed the best paranormal romance books currently on the market, making it easier for you to pick one and explore love between magical beasts and beings that is enough to have you swooning and eager to read the next page.

Hexes and Hot Flashes: The Oracle of Wynter (Book 1) 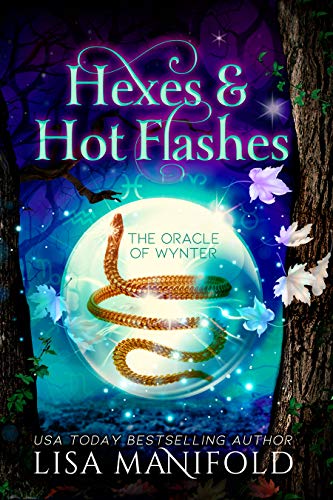 Written by USA Today Bestselling Author Lisa Manifold, “Hexes and Hot Flashes” follows Wynter’s messy yet intriguing life as a 40-something widow. She discovers that her husband had a secret life, including a whole other family.

From a talking tattoo to being wooed by a sexy stranger that knows her secret and seems to know much more too, the story takes on a hilarious tone as she explores her new life as a widow left to pick up the pieces of a marriage based on lies.

However, the stranger knows all about her secret, and when he mysteriously disappears, she must do everything she can to find him in the hope that he has the answers to what is happening to her. “Hexes and Hot Flashes” will keep you on your toes and is a real page-turner with Wynter frantically trying to make sense of a curse that is taking over her life while protecting those she loves. So, click on the link and choose one of our convenient formats to enjoy a love story with a twist.

A Court of Thorn and Roses 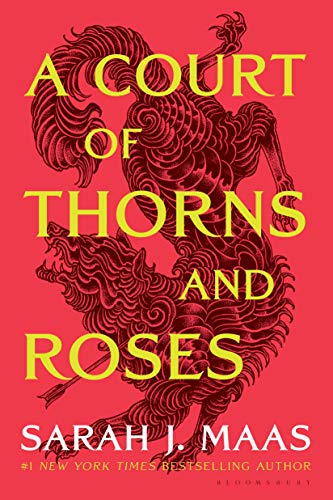 New York Times’s Bestselling Author Sarah J. Maas brings us a story of love in the faerie realm. When 19-year-old Feyre kills a wolf, she is kidnapped by a faerie seeking revenge. While his usual punishment is lethal, he instead takes her back to his land to live among the faeries, leaving behind the life she once lived. Faced with life in a new, magical world, she meets Tamlin, a faerie, and the love connection between the two is almost instant.

Feyre feels like she has met the man of her dreams and that this faerie world could be her new home. She is happy for the first time in her life. But when danger comes their way and threatens the peace in the faerie world, Feyre knows she must do all that she can to protect her love and save the world that she has come to love.

Will she be able to save them both, or will her new life come to an abrupt and heartbreaking end? Join Feyre in the battle to save everything she has come to know and fall in love with the innocent love that Feyre and Tamlin share. To find out what happens to Feyre and Tamlin, click on the link to be redirected to an online store where you can choose from hardcover, paperweight, Kindle, or audio formats. 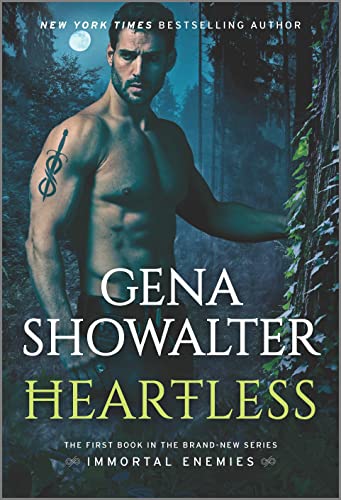 If you enjoy romance novels about faeries, you will love Heartless by New York Times bestselling author Gena Showalter. When fae King Kaysar seeks revenge, he has a unique way of doing it and resorts to kidnapping his enemy’s bride to avenge his kingdom and the crimes against it.

But his captee has other plans and escapes to the human world to have her heart transplanted into that of a human girl to spite the king and possibly find a way to escape the new home that is her prison. Chantel Bardot was an ordinary gamer girl, but once she has the heart of a faerie, she finds herself stuck in a fearful world that has her battling monsters and her own feelings as she is tempted by the dangerous king and his forceful ways.

Now faced with feelings of lust but also fear, she must fight the urge to give in to the lust and find a way to protect a kingdom that she didn’t want to be a part of in the first place. Can Chantel save the kingdom and her heart, or will she flee and leave the domain and King Kaysar to face the monsters alone? If you want to find out how this story ends, click on the link, and purchase this book in the format of your choice. 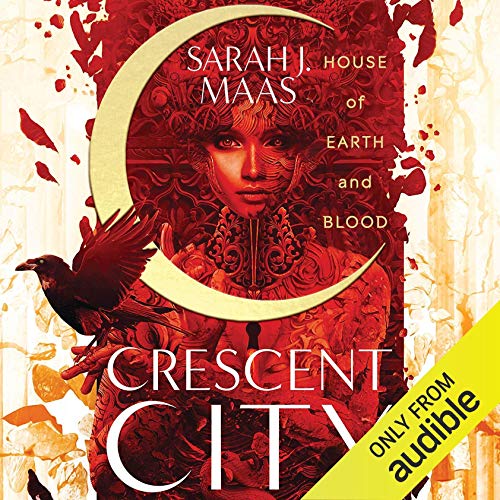 Sarah J. Maas brings us yet another bestseller with the release of House of Earth and Blood. This time set in Crescent City, the story follows Bryce Quinlan, a half-fae half-human girl that finds herself the sole investigator when a demon murders her friends. But of course, nothing can be simple, and the journey to finding the murderer and avenging her friends has her meeting a fallen angel that could help her if he is willing to make a deal when he is offered one by those he wronged.

Hunt Athalar has the chance to redeem himself and ultimately have his freedom back if he helps Bryce. While the deal seems simple, neither Hunt nor Bryce factored in the possibility that working together might cause them to develop feelings. Hunt will do all he can to help Bryce in her quest for revenge, and as their burning passion grows, it seems that nothing will come between them.

But a dark power looms, and soon their lives are turned upside down as they fight against another enemy—one that can destroy them all. Follow the couple’s dangerous journey as they battle evil at its most heinous by clicking on the link and purchasing this suspenseful new novel available in hardcover, paperweight, audiobook, and Kindle formats.

King of Battle and Blood: Adrian and Isolde (Book 1) 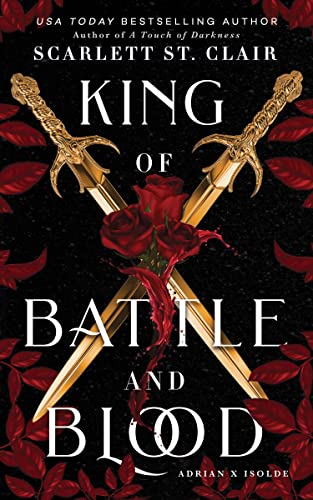 In a world of vampires and royalty, the human Isolde de Lara makes the ultimate sacrifice to end an ongoing war by marrying vampire King Adrian Aleksandr Vasiliev. Her plan to kill him to avenge her people is thwarted as he discovers her agenda. But instead of enslaving or killing her, he holds a darker threat over her—turning her into a vampire.

USA Today’s bestselling author Scarlett St. Clair explores the relationship between good and evil in her new novel “King of Battle and Blood.” While this is only Book 1 in the series, the chemistry between Isolde and her vampire king is undeniable; she fights her feelings for him as they work together to end the war and protect his kingdom. However, this is a love story with a twist as Isolde explores the possibility that the king harbors a secret.

When she questions why, despite her hate and plans to have him murdered, he chose her as his queen when he could have had any woman of his choosing, she is not prepared for his answer. Find out just what the king is hiding and read on to see how Isolde deals with the truth when you purchase this novel. Then, click on the link, choose your ideal format, and discover why the King will not let Isolde go. 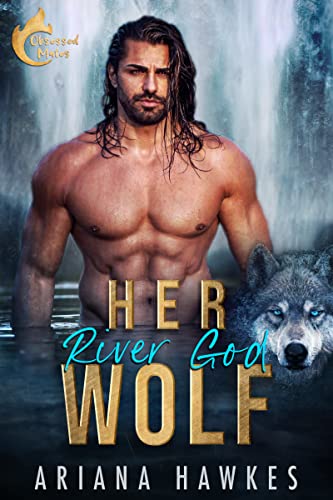 In the novel “Her River God Wolf,” author Ariana Hawkes explores love within a wolf pack. Beau has been hurt before and has vowed to be alone for the rest of his days. But all that changes when he finds Savannah, a wolf, dumped on a riverbank alone and left for dead.

Hurt and rejected, Savannah, too, though she had given up on love but finds herself falling for him. Her instinct and the fear of yet another heartbreak tell her to stop wanting him, but not even his dark side can scare her away.

As the lovers find themselves in a passionate love affair, danger lurks, and the two must fight together to overcome the evil forces that threaten them. And will the secret that Beau is hiding drive Savannah away, or will she fight for him and the love they share? Click on the link to download Her River God Wolf today and find out exactly what path Savannah chooses in her quest for love and to overcome the hurt of the past.

Midlife Magic: Not Too Late (Book 1) 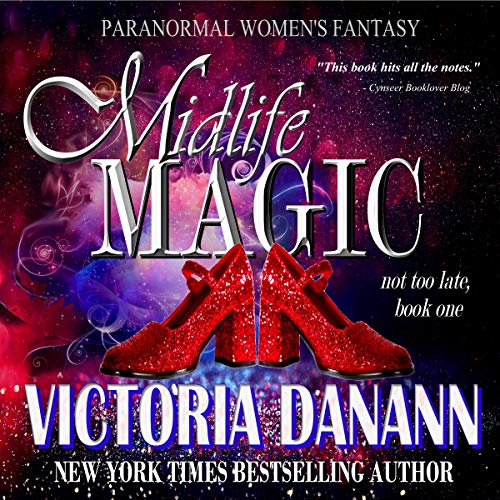 Dumped a day after she turns 43, the heroine of our story has to start over, penniless and slightly “over the hill.” But all is not lost, as New York Times and Internationally bestselling author Victoria Dannan explores in her latest offering, “Midlife Magic.”

After inheriting a small yet quirky antique store in a small English town where faes and humans live side, our divorcee navigates her way through some hilarious mishaps as she hosts magical dignitaries and has to mediate their grievances a few times a year. Never a dull moment when faeries are involved—she needs to adapt to living in a town where everything is not quite as it seems.

Will this be the new life she has longed for? Can she be happy again after so many years of being married to someone who hurt her so badly in the end? You can find out how this exciting and hilarious story ends by clicking on the link and choosing “Midlife Magic” in your preferred format. 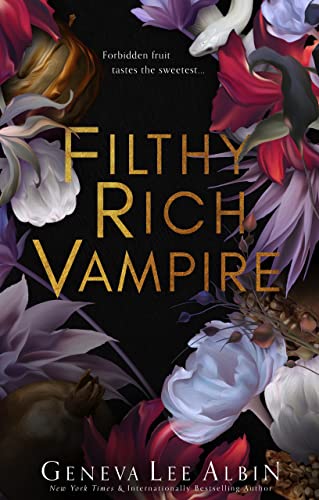 Filthy Rich Vampire is the latest book by New York Times and bestselling author Geneva Lee Albin. A novel about dark magic and passionate love, the story centers around wealthy vampire Julian Rousseaux and his quest to find a wife before the social season ends. Being the eldest, it is not only his responsibility but also his mother’s wish that he settle down and find a mate.

When he meets human Thea at a gala event, things go awry, and although she is not his type, they strike up an unlikely deal once she finds out his secret. Promising her protection from the other vampires, he suggests they form an alliance of sorts and pretend to date to keep his mother happy. In return, she is safe, and he will help her pay her mother’s medical bills.

But as we all know, love has a sneaky way of interfering with plans, and a tale of secrets and unbridled passion ensues as the novel explores the forbidden love between Thea and her vampire lover. To read Book 1 in this series, click the link and select the novel available as a hardcover, paperback, Kindle format, or audiobook. Then, see how they handle love in a hazardous environment that has them both in danger.

Paranormal romance novels are popular as they break from the mundane hubbub of everyday life and have an almost dangerous side to them as they explore the concept of love on a paranormal level. Faeries, wolves, shapeshifters, and vampires are among the most fantasized about creatures.

While we know they do not exist, reading about being in a relationship with one can be exciting and just what is needed to escape for a while. We hope that the list above is helpful and that you will consider one of our books as your next read.