Are you going to put your life on the line to save your client’s life? More of the best romantic suspense book series at My Romance Reads.

Danger and love come together for the bodyguards at Redmond Guardian Service as they put their lives on the line for their clients.

Novellas one through five in The Guardian Series, from Amazon Top 100 bestselling author Bella Young.

Kaylin Lawrence has kept to herself as a trauma surgeon at Brooklyn United’s emergency ward. Always busy and eager to help her patients, she comfortably settles into her daily routine. Then, her life is thrown into a whirlwind when mysterious notes start appearing at her doorstep. Fearful for her life, Kaylin hires a bodyguard named Rusty Redmond. The attraction between them is instant and undeniable, but can love blossom when danger looms just around the corner?

Come To Her Rescue

Natalie Turner decides to end a toxic relationship with her possessive boyfriend. Unwilling to move on and accept her decision, Gavin harasses her at every turn. At the request of her concerned best friend, Kaylin, Natalie agrees to have a bodyguard named Colt look after her. Can a budding romance grow as Colt tries to rescue Natalie from the clutches of her aggressive ex-boyfriend?

Lila Morgan is excited about her residency at Brooklyn United hospital. The straight path she set out on to become a doctor takes an unexpected turn when her father, Senator Wesley Morgan, starts receiving death threats. Concerned for his only daughter’s safety, the Senator employs the bodyguards at Redmond Guardian Service who dispatch their newest member, Sawyer Youngblood, to protect Lila in this time of political turmoil. Can the two of them see past their differences and form a lasting bond as the threat level escalates?

Hayley Wild is an up-and-coming singer who does her best to provide a better living for her family. Unaware that her recent car accident could be more than a mere coincidence, she is oblivious to the larger threat that her mother is determined to keep from her. As part of a newly formed team of bodyguards, Redmond Guardian Service sends its youngest member, Bryce Thompson, to help set up Hayley’s private security detail in hopes of shielding her from all possible threats. Can Bryce see past his admiration of Hayley as a fan of her work, and focus on the task at hand?

Faith Williams is a researcher at a pharmaceutical company on the verge of developing a vaccine for a deadly virus. With potential billions of dollars at stake, she finds herself a victim of corporate espionage as a hitman, out to get her research, pursues her relentlessly. Fearful and panicked, she employs Redmond Guardian Service who sends Grant Rogers as her bodyguard. Little does she know that Grant is her ex-boyfriend.

Check for the best romantic suspense book series at My Romance Reads! 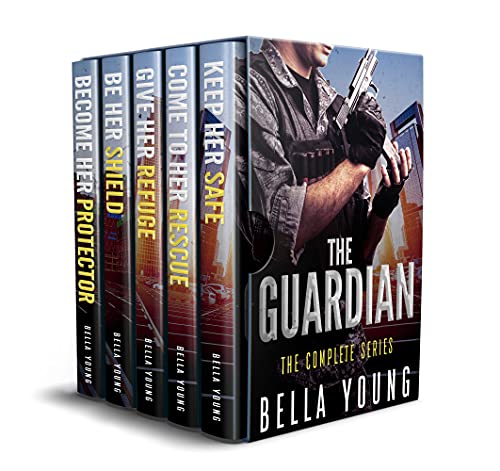 Amazon Top 100 best-selling author Bella Young, writes novellas full of mystery, suspense, and intrigue. Her books feature relatable characters in dramatic circumstances. Plunge into one of her books and experience the thrills.

Go on a journey with Bella as she pursues her dream of becoming a New York Times best-selling author. Sign up for Bella’s newsletter and receive new book updates, free books and chapters, promotions, giveaways, and much more: